In 2015, a strong-stomached group of Chicago food lovers gathered at Lemmings Tavern in the Bucktown neighborhood for a blind taste test to determine the best hot giardiniera. There were more than 140 people at the party. Special thanks to everyone that helped make this happen! The party had:

So many giardinieras to taste

Our group of 30 self-declared giardiniera loving judges voted and here are the results...

#1 is Potbelly's! This surpised some folks. We've always loved Potbelly's giardiniera. We think they get unfairly dissed sometimes by foodies because, yeah, they're a big chain now -- but don't forget they were born and bred in the Chi-town. They've taken time to perfect their giardiniera. For a chain that has more than 300 stores across the country, they have a bold, spicy mix, which we appreciate. They're not afraid of serving the heat. They're also helping spread the giardiniera word by introducing it to people in different regions who would otherwise never come across it - for that we're forever grateful.

Check out the rest of the winners - at a close second comes Freddy's, one of our favorite delis/pizza joints around Chicago. #3 is the Da Coach's giard. Fiore's, a small neighborhood deli, comes in strong at 4, and Kelsey D's rightfully won the #5 spot - they're doing an amazing job spreading the giardiniera love down southwest in Arizona and other states.

Al's Beef surprised a lot of people coming in last. Truth is, out of hundreds of jars to pick from, coming in at #20 aint bad, but they do have a totally different style than the others - it's a beef-stand giardiniera, which is usually thinner and less chunky than traditional giardiniera on this list (more red pepper flakes and oil). Looking back, we probably shouldn't have included them in this group because it's not really apples to apples when it comes to beef-stand giard versus the rest of these. (We all still love ya, Al's!)

Many folks were also surprised by Bari coming in second-to-last. We had a hunch this would happen. You hear a lot of people say Bari is people's favorite, but I think it's more of nostalgia making them say that. Their quality has been going down the tubes in recent years and their passion seems to have run out. Their giard has a strong fermented taste which I think threw a lot of people off. We were also surprised about Chicago Johnny's, which we love. They have a unique approach using paprika that gives it a smokey taste which may have thrown a few judges off when comparing it to the other more traditional giardinieras.

Note: Some initial vote tallying was off (we were doing it by hand at the party - lesson learned that google docs is the way to go next time), so a few giardinieras switched spots the next day as we double checked our <poor> math.

How the Blind Giardiniera Judging Worked

This was a blind taste test, so the giardiniera was in plastic containers with randomly assigned numbers on them. Each judge had to taste the giardiniera plain with a spoon or on a Ritz cracker. In between their tastings of the 20 giardinieras, they were able to grab other food and drinks to cleanse their palates/pad their stomachs. Each judge was given a scorecard where they rated the giardiniera on a score of 1-10 (1=lowest rating, 10=highest rating), based on five factors:

The scorecards were collected and points added up to determine the winners. Note: overall tastiness points were doubled since that was the most important voting point. Points were not given for heat because we wanted to base winners on the best taste versus how hot they were (we had them notate heat levels just for fun and for research purposes).

So what do you think? Did the judges nail it here? Do you think another brand should be added to the top 20 list? Hit us up on Facebook and let us know. We hope to have another giaridiniera off next year!

Some Pictures from the Best Giariniera Party That's Ever Happened 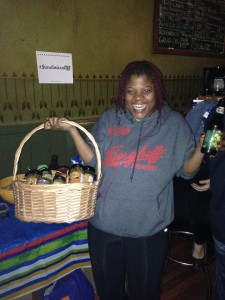 One of the happy giardiniera giveaway winners! 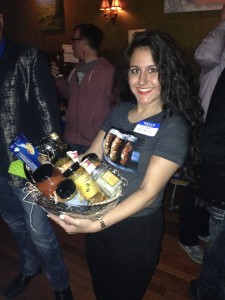 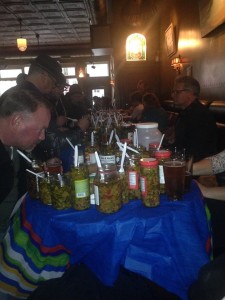 Don't worry, we supplied free Tums for everyone